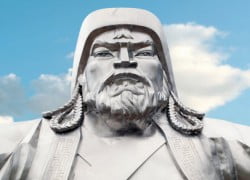 From time to time, I get clients and friends asking me how a mum of three like myself started out with less than $300 and in just a few short years managed to create her ultimate lifestyle through business, working from home around her young family, travelling the world regularly and making a seven figure income.

Whenever I get asked how I managed it, I think of Genghis Khan. Strange huh!?

Ghenghis Khan was one of the greatest conquerors in history. He used to invade with a massive army and he and his soldiers would bring their families along. When their boats got to shore, and prior to making camp in preparation for battle, Khan would order all his army’s boats to be burned to the ground! CRAZY, I thought, the first time I read it… There they are in a strange land.

About to attack anonymous people, their families in tow, he burns their only means of transport out of the situation.

Now, think about these for motivators. Khan and every one of his soliders had their fate and the fate of their wives and kids; their very survival hanging in the balance.

Khan’s famous quote was “our boats are ALL burned, there is no retreat. We win or we perish!”. They ALWAYS won. Because there was no other options; win or perish.

When we burn our boats, a sense of fearlessness develops, and our motivation levels to succeed go right up!

I realized that one of my secret to success was that, when I started in business, I had burned my boat without realizing it!

I had $254.00 in the bank, I had a quarter of a million dollar mortgage, and $30,000 on credit cards + a car lease for the rubbish Hyundai we were driving. I had a newly unemployed husband, a toddler in tow and I was almost 9 months pregnant. I had nowhere to go but to succeed or perish!

Without knowing I burned my boat.

I did what most people would do when faced with that choice. I succeeded.

There was no option BUT to succeed.

I know of a guy who went through a divorce and gave his wife everything.

Within a year or two he was wealthy again.

But I don’t believe we need to go through financial crisis, bankruptcy or a divorce to get that sense of fearlessness that propels us to success.

Instead, I believe we need to invest in probably the most important asset we have: our education.

In fact, there is really only one thing that I consider to be the most important asset, which can give us true security. That’s this: “Knowing we can create income at will through our own flexible, home run business.”

After all, if you lost everything tomorrow you’d still be able to run a lucrative small business from your car if you had to!

And if you knew how to set up such a business on a small budget then you’d have real security right there between your ears.

The security is not in the fixtures, the fittings, the computers, the filing cabinets, etc. in your business. That can all disappear tomorrow.

If you are interested in commencing on a journey of self reliance, independence and possibly serious wealth, To know more call us on 1800 61 71 11